Robert Pelot, a lifetime resident of Bradenton, graduated from the University of Florida in 1970 with his Bachelor's Degree in Pharmacy. After Robert graduated, he purchased Pelot's Pharmacy from his father, John Crews Pelot. The two ran the pharmacy together until 2000 when Crews was 99 years old and decided it was time for him to retire. Robert has been running the pharmacy ever since. Robert has been married to his wife Donna for over 40 years, they have 5 children and several grandchildren.

Doug Sharon, our "Wednesday Pharmacist," graduated from the University of Florida in 1978 with his Bachelor's Degree in Pharmacy. Doug served 8 years in the Air Force and 22 years in the Army. Doug has two daughters, Kathleen and Judith.

Sara Pelot Dasher is our fill-in pharmacist from Claxton, GA. Sara is Robert's second oldest daughter. She went to the University of Florida for her undergraduate degree, then went to Mercer in Atlanta and received her Pharm D in 2008. Sara met Blake Dasher while attending Mercer and he convinced her to move to his hometown in Georgia. The two were married in April of 2011.

Amy Tindell is Robert's oldest daughter, she works as our secretary/ pharmacy tech. Amy is married to Travis and they have 2 children, Rachael and Rebecca. Along with their two children, they have a niece Devyn, who also lives with them. Rachael and Devyn both work some days at the pharmacy after school.

Erin Daniels is one of Robert's twin daughters, she works as our pharmacy tech. Erin is married to Mike they have 2 children, Myah and Emma.

Jessica Pelot is Robert's other twin daughter, she works as our pharmacy tech. Jessica graduated from the University of Florida in 2003 with a degree in Public Relations.

Debbie Curtis, a longtime friend of the family, is our cashier/clerk. Debbie is married to Rick and they have one daughter, Nadine. Nadine also works at the pharmacy after school.

AJ Holloman, a longtime friend of the family is our delivery driver. AJ is married to Angela. Aside from delivering, AJ is a very talented singer. He sings at several different churches and for friends funerals. 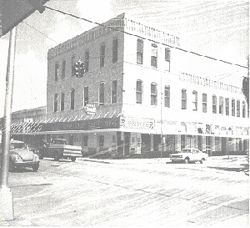